I’d been hearing about Cuckoo Callay since the day I got back to Australia, particularly about their infamous bacon festival. Now being slightly adverse to bacon and all meat for that matter, I tried to stay away until the festival was over. However, on a rainy Sunday morning I just couldn’t resist anymore and I was off to Newtown to try anything on offer, as long as it wasn’t bacon related…

Being a Sunday morning the place was packed like most other cafés. We were seated outside, which wasn’t preferable given the weather but we were happy to be seated at all given the busyness! Starting off with the coffees – which were great – I ordered a soy macchiato followed by a soy piccolo (that’s how good they were). But let’s just get straight into the nitty gritty – the food.

We started with the Cinderella’s Breakfast ($18), consisting of pumpkin fritters, house cured salmon, poached egg, basil pesto and heirloom tomatoes. First off, this dish was definitely easy on the eye; being bright and green making us feel very healthy. The downfall of the dish was definitely the fritters, being just a mushy mouthful of pumpkin. Unfortunately, they weren’t crunchy on the outside like you expect a fritter to be, and lacked any depth of flavour. The combination of flavours worked well but really needed a light sauce on top or something to break up all the soft flavours. Even though there was a a lot of pesto on the plate, there was nothing to just break up all the creamy textures in my mouth.

Next up was the #Hashtag Browns 3.0 ($18) with basil and vintage cheese croquettes, poached egg, pea puree, marinated avocado and we chose the haloumi. I definitely enjoyed this dish more than the previous, having a nice crispiness to the croquettes that was missing in the fritters. The combo with the haloumi was great, however again I found this lacked depth of flavour, particularly in the croquettes. When I bit into them I mostly just tasted potato, with little cheddar or basil flavours coming through. We also had this one with bacon (although I didn’t try it so can’t really compare – sorry!). 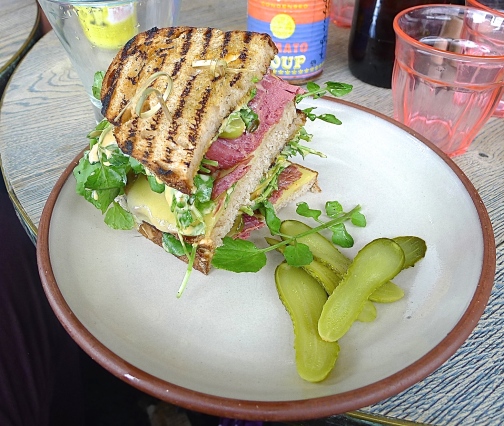 Another one I didn’t try was the Reuben ($17), however it got rave reviews by those who tried it. Unfortunately this is probably the only dish at the table that was thoroughly enjoyed and was gobbled up straight away!

Unfortunately, another slight disappointment was the Tommy Two Guns ($11); bacon, fried egg, homemade chilli relish, baby spinach and aioli on a brioche bun. Although the aioli was pretty amazing, it just tasted like your average bacon and egg roll, with the chilli relish being almost indistinguishable.

Overall we seemed to have hit Cuckoo Callay on a bad day. The coffees however were amazing, and the service was pretty spot on. I’ll definitely be giving it another try on a weekday when it’s not so busy and hopefully I’ll notice an improvement with the food. Have you guys had a better experience at Cuckoo Callay? What did you guys order?